An active weeked in Tenerife: winter sun and hiking in the Anaga Mountains 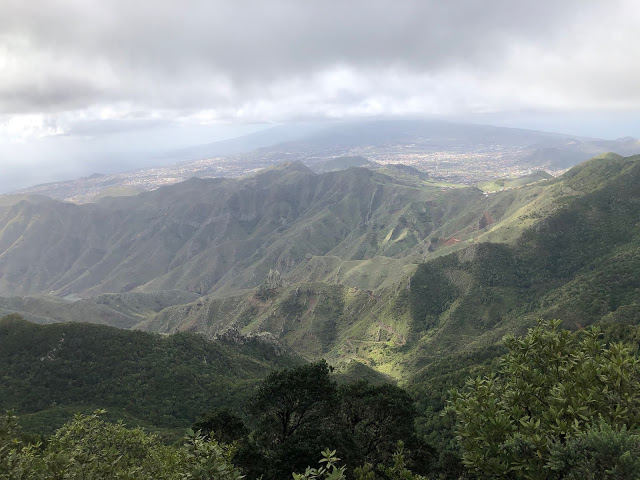 Tenerife: The place for winter sun. Many people associate Tenerife with cycling breaks and winter beach holidays, but did you know the island’s vast mountain ranges is also the perfect holiday destination for running, hiking and many other activities? After taking part in the 8km race on Saturday, we spent the Sunday hiking in Taborno.

From Santa Cruz, Ricardo, our guide, drove us  to Taborno. Taborno is one of the oldest villages in the Anaga Mountains. The hike started at the Pico del Ingles – supposedly named after an Englishman fell to his death. I had to laugh.

The views though were  breathtaking. Just take a look. I was taken away by it. I came with zero expectation and I’m glad – I had no idea these were the kind of views to expect.

After walking round the Pico del Ingles, we drove up to the real start of the hike; it began with goats and a narrow, winding well trodden path up the side of a hill. The dry and arid climate with cactus spread across the route, reminded me of running through Death Valley during the Speed Project earlier this year – except with slightly more greenery I suppose.

At one point, we walked past a stony cave and sat inside, watching nature. Along the Taborno route we took, we experienced all the weather – wind, rain, sun.

The green mountain ranges with the bunches of cactus dotted around were one of my favourite things to see along the route – the juxtoposition of the two showed how nature thrives here.

If you do go hiking in Tenerife, I’d suggest packing a rucksack, a jacket and either wear hiking boots or trainers with a good grip. The routes we took were trails and along with the high drops and narrow paths at times, you needed to be alert and be prepared to use your hands to grip onto stones or get mucky with the ground.

You get to see it all on the Taborno route – the sea is alongside the mountain range, and as you zig zag along the route, there is always the formidable sight of the blue, blue Atlantic ocean.

After we finished the long hike, we drove to  a typical restaurant where we ordered plates and plates of typical Tenerife dishes. Hiking is hungry, hungry work. Next on the itinerary was paddle boarding in the sea. We had really enjoyed the hike and after hearing about other areas nearby to visit, we persuaded our guide to show us a few of them.

The route winded down the Anaga mountains and we zoomed down the smooth tarmac – I couldn’t help myself from noticing how smooth the tarmac was – these roads must be brilliant for cycling down the descents or hill climbing.

We stopped to watch the rough sea waves batter against the coast line. We had dropped elevation but it was slightly chilly now. Something about these waves was so calming to watch.

Hopping back into the car, we drove to the final stop. Ricardo told that this was a magical place – there’s nothing like it in Tenerife. Well, ok, if you’re going to say that, then, let’s explore!

We trekked through some muddy paths, jumping across streams. What was this place we were going to finally see look like? What was so magical about it?

And lo, behold, after peeling our way through some ginoromous plants, we found it. Apparently, this is the largest number of palm trees in one area in Tenerife. With the mis hanging over the tops of the mountain ranges in the back, and these exotic looking palm trees in the front, I wouldn’t have thought this was Tenerife. But it was. Absolutely magnificent.

While only being a weekend trip, I saw that Tenerife offers so much more than a winter beach holiday. Whether you want to run, hike, cycle, surf or kite surf, the island has a wide variety of sports and activities you can do. Would I come here again? Yes definitely. I’d love to hike or cycle through the Teide National Park or take part in the widely known Tenerife Bluetrail ultra.   Would you go to Tenerife? Have you been before – tell me about where you went and what you did.      Disclaimer: this trip was at the invitation of the Tenerife Tourism Board.