Becoming a book guerrilla: Just why? 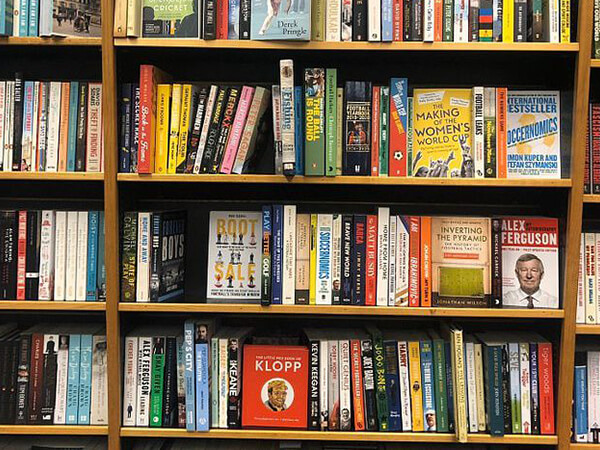 Recently, I tweeted about the lack of visibility of the books by or about women in sports at a Waterstones branch. It resulted in a huge conversation on social media and The Daily Mail publishing an article about it. I thought I’d share my thoughts around it and why I did what I did. It’s lunch time in Canary Wharf. I haven’t bought a book to read in awhile. I also need to buy a friend’s birthday present. But the idea of weaving my way through the hustle and bustle of bankers and insurers to get to my desired shop is off putting. I just want some peace. So, I find a quieter area of the Wharf and stumble across a Waterstones, hidden away from the other shops. I haven’t read a good book in a while. My training for Comrades ultramarathon 2020 is going well. I could do with some motivation though. Some inspiration. I venture into the bookshop.

I walk around the books. The bright yellow front cover of Greta Thunberg’s ‘No one is too small to make a difference’. I’m not quite in the mood for that. ‘So you want to talk about race’ looks at me. No. I talk about race a lot. My hands move across the different books. Management books? No. Self-help books? No. Personal development books? No, I have a lot of those. And then my eyes see ‘Sports’ at the back. Hmm, how predictable of me to be drawn to that.  So, I walk up the stairs and turn left into a narrow corridor where several shelves are stocked with books for the Sports section.

But then something catches my eye. All I see are books by or about male athletes. No, I’m really not interested in Alex Fergusan. Klopps? Doesn’t interest me. Mohammed Ali was inspirational, but no, I want something else. Besides one book that’s prominently standing out, I can’t see any other books by or about women. I turn around. Maybe there’s a big table somewhere nearby, with all the books on female athletes spread across it. Nope. Nothing. I start thinking whether Waterstones have actually considered putting books by or about female sportspeople on the shelves. I’ll give it another try.

I crouch down onto my knees and start looking through the titles individually. Finally, I start to see them. Hidden among books in the bottom shelves and buried between books on other shelves, I find several books by or about women in sports. Ahah! So they do stock them. But soon I start to think: are the way in which books are displayed on shelves gender biased? We’ve seen that data can be gender biased in measures of human life, by the likes of the exposé by Caroline Criado Perez, so it’s entirely possible that a bias (unconscious or not) exists even in the layout of a bookshop.

Are the way in which books are displayed on shelves gender biased?

And then it crosses my mind. Among the books I’ve retrieved is ‘A life without limits: A world champion’s journey’ by Chrissie Wellington. Whether you enjoy parkruns or triathlons, many will know who she is. She’s one of the most recognised and inspirational female athletes. Judy Murray is another extremely well known woman in sport. And the same with Louise Minchin. And England’s Women’s football team. And if you use Instagram, Bryony Gordon is a well known “underwear runner” (her words). I stop myself. All these women are just as well known, or in some cases better known, than the male athletes whose books are so prominently displayed. Why were their books placed in such a way that it was difficult for a buyer to find them? Now I could be cynical; I could say that this is an intentional tactic used by the shop to ensure fewer people buy books about or by women in sports as a way for the shop to stop stocking such books. The argument being that if nobody is buying the books, there’s no demand for them. But, that’s being on the ultra cynical side of things and I doubt this is the case.

Getting More Women into Sports

If you know me, one of the things I am passionate about is getting more women into sports (especially women of colour) and encouraging them to step outside their comfort zones. This has stemmed from the endurance events I have done where female participants are in such small numbers you could probably count them on both hands. What I have learnt over the past few years is that visibility is such a key part in increasing the number of women (BAME or not) into sports. As the adage goes, if you can’t see it, you won’t do it or know that you want to do it. Marketing is everything. Even Steve Jobs said so. Hiding these books about or by women in sports from plain sight meant that those walking past the shelves or looking at the shelves, wouldn’t have been aware of these books. And why do we need these books? Besides raising awareness of role models, it also adds diversity to thought and prevents the story around sport being one narrative.

To increase the number of women (young and old) in sports and the number of those becoming physically active, we need greater visibility of female role models. Images play a part in this and the front covers of books play an important role in a bookshop – they visually communicate to the potential reader. If the potential reader can only see a sea of men on those bookshelves, they’ll most likely leave with the impression that women either don’t really do sports or sports isn’t a place that’s welcome for women.

Then it struck me. Why don’t I take these books in my arms and display them in such a way that they are far more easily noticeable? I don’t necessarily agree with having separate sections for men and women in sport – rather I believe the two can be integrated but women in sports’ books need to be equally displayed with prominence just as the men in sports’ books are. As I put the books randomly around the shelves, I stood back and looked. A tiny, tiny tweak made with only a few books on women in sport yet it felt like such a significant difference to the visibility of the books on women in sports there. The aim was to create a greater balance in demonstrating to the viewer what books were there on both female and male athletes. Yes, of course there are going to be more books on men. Given that the mainstream media and sports world has predominantly focussed money, resources, time and limelight on men’s sports over the centuries, it’s inevitable. I accept that. What we need now, is to create space to enable women to enjoy that media coverage, the money and resources just as much on their sports.

I wanted the HQ at Waterstones to take note of this. We have so many books on women in sport out there – what we need is increased visibility of their work. Without the visibility, it’s harder to showcase these books on women in sports. These bookshops need to play their part in promoting books on women in sports as well. Yes, it will be hard, but that is because for so long, attention has been focussed on male athletes so bringing about that change in equality in sports, including in the sale of books, will take time. The system of merchandising needs to change: the argument that the books were probably displayed in such a way originally due to book popularity, then surely suggests there is an unconscious bias against women because men have been in a privileged position of dominance in sports for such a long time.

There are booksellers who are working on change. District councillor and children’s bookshop owner, Helen Tamblyn-Saville, for example, ensures the books stocked at her shop are about inspirational young women as well as non-traditional stories about strong princesses. For things to happen, change needs to take place.

While I didn’t come to a decision on book purchase, as I walked towards the exit, I smiled as I walked past Greta Thunberg’s books on display: it’s true that no one is too small to make a difference.