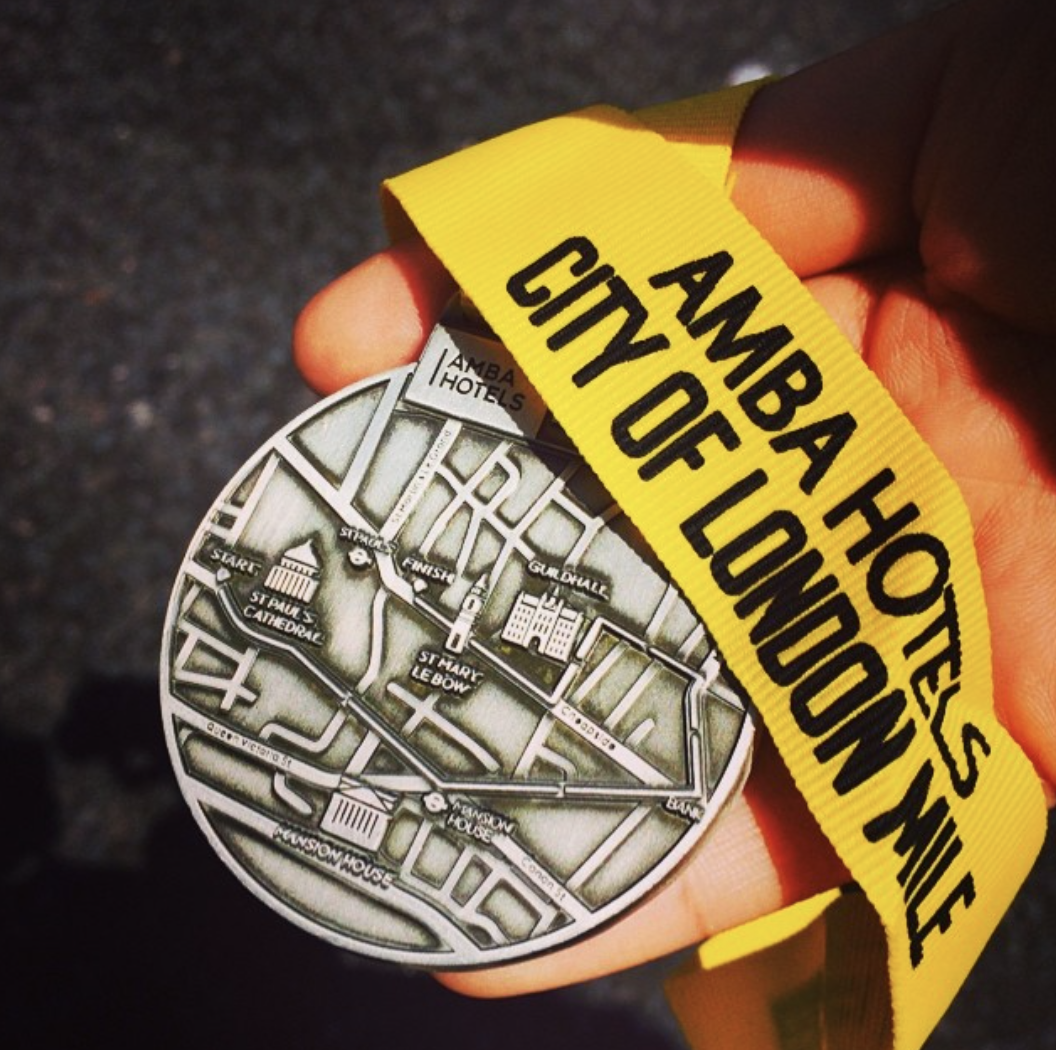 So after the exhilerating experience of running a mile around St James Park and Buckingham Palace, I looked up other 1 mile races and stumbled upon a 1 mile race taking place around the City. I love the City; the bars, restaurants and buzz there differs from any other place in London (plus you’re surrounded by men in tailored suits…) so this race was just shouting out to me, “Run Mara, Run.”

This race was headline-sponsored by Amba Hotels, a 4-star contemporary hotel group that is launching 4 conversion properties in London and this was also the first year of the event. Other sponsors included Run-Fast and Mizuno, who both had an obvious presence throughout the event.

I went to Run-Fast on the day before the event to pick up my race pack. Run-Fast is a specialist running shop, based in the City, awkwardly located behind a computer shop on Leadenhall Street and is probably the most minuscule sports shop I’ve ever visited. The staff are very knowledgeable, but the store itself is not my cup of tea. They stock a very, very small selection of trainers for women and men, and for women in particular, the choice of trainers is so very limited. Plus, most of the women’s trainers looked masculine. On the other hand, their online store is far more impressive with a bigger and better range.

Their running gear range was impressive and I found myself wanting to purchase a lot of the clothes. They had a pretty decent range of running tights of long and 3/4 lengths as well as shorts.

So Race Day. That was Sunday. I arrived at St Paul’s and headed over to the bag drop-off tent and started to warm up. Sunday was quite warm, so running in this weather was going to be tough.

When the race started, they used a starter pistol to sound the start of the race and I headed off. At first it was a little difficult to run; imagine trying to run in a peak-time train. It felt like that, but once I had nudged my way into some space and we had all spread out a bit, I just ran. Constantly thinking “don’t run too fast yet, don’t run too fast yet, pace yourself woman!” Oh and I was also praying that my trainer laces wouldn’t undo like last time! Thankfully they were obedient.

At some point of the race, I started to push myself faster and suddenly I had all this energy, which I must have saved up, and I just ran. I had the eye of the tiger. Towards the finishing line, I could see the timer and I thought, “”I have to run this before reaches a certain time. Let’s do this.” And I did it. Faster than my Westminster Mile Race and my heart didn’t feel like it was going to implode. That’s what you get for not running too fast at the beginning and eventually losing steam very early on in a race! I am definitely running in another 1 mile race.

Here’s the medal. Definitely wins the prize for coolest medal.

Run-Fast were selling Mizuno gear with a 25% discount on the day and there was a lady from Amba Hotels providing well-deserved massages to post-race massages to the runners. I overheard someone saying that David Weir had started one of the early morning races so the event organisers really had tried to make this an unmissable event. It was originally a paid-for event, but they changed it to free entry (those who paid were quickly refunded), which was great. Hopefully next year they will make it free entry again.

They really did try and pull out all the stops on the  day of the event, but I think there was room for some improvement for next year’s race. For example, I think it would have been great if the race date was marked on the medal. Nevertheless, I look forward to next year’s race event.

Here’s a video I took of the finish from the International BMC (British Milers’ Club) Men’s B Mile Race. The commentator is Nick Anderson, who is a running coach and has written for the likes of Men’s Fitness, Runner’s World and Harper’s Bazaar.