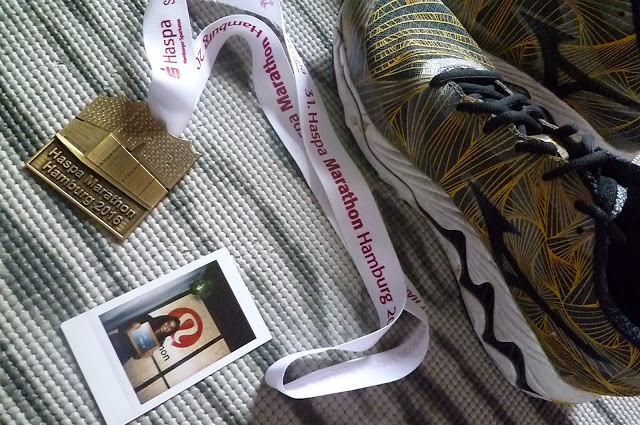 And let me tell you why. No other race has left me feeling like this. Maybe it’s because it’s left me realising that I can achieve anything I set my mind to. Maybe it’s because it’s left me still very much stunned at knowing I’ve ran a marathon. Read on and you can decide.    But first, to see my brief breakdown of the good, the bad, but not ugly thoughts on the race, read here.

When I had runner’s knee, towards the end of my training plan, that set me back for a while. I struggled to get back into the rythmn of marathon training, for fear of triggering the injury again. But, I was determined it wouldn’t be a setback. I wanted to run the marathon. And, I wanted to run it with my first goal in mind.

I was feeling quite nervous in the last few weeks leading to the marathon. I was also so excited. My heart kept pounding with excitement every time I told someone new I was marathon training. Up until February, not many people knew I was training for a marathon. As the weeks started to pass by quickly, I kept slipping it into as many conversations I could. “Sorry, I can’t stay out too late, I’ve got marathon training in the morning.” “I can’t meet you this morning, I’m training for a marathon.” “Let’s have a date night another time, I’ve got a marathon to catch up on.” When I was at parties, because people can find it difficult to understand that I’m t-total, I would use it as a reason why I wasn’t drinking alcohol:”oh, I’m not drinking as I’m marathon training.”

Basically, I was making sure that everyone knew I had this marathon coming up. Does that make me a bit of a show off? I still can’t decide on that.

I arrived in Hamburg on Friday. The weather was very much like London in January: cold and windy with regular, short bursts of rain. The weather forecast wasn’t looking too great for the weekend, but luckily I had packed for all kinds of weather: sunglasses, umbrella, winter and spring coats just in case. The same with my fit kit: shorts, 3/4 tights, long tights, t-shirt and long sleeved top. Just in case.

The hotel was about 15 minutes, via U-bahn, from the marathon start/finish and marathon expo, which was perfect. Friday and Saturday was spent sight-seeing, whilst I also visited the marathon expo on Saturday. I was a little disappointed with the expo, but I’ll say more about this later on, though I did collect my race bib and finisher’s t-shirt here.

In the two days prior to the race, I walked quite a lot around the city. When I returned to the hotel on Saturday evening, my legs felt slightly tired, and I did worry for a few minutes that I may have walked a bit too much that day. I used my pedi-roller to ease my slightly-tired feet and legs, and all was good. Thank goodness! Next time, I will definitely not walk as much the day before a marathon.

For me, one of the most important things I did on Saturday was to walk from the 42km mark to the finish line. It massively helped me to visualise myself finishing the race, which is an important step in my SMART goal strategy. It also helped in that during the race I knew how far I had to go to finish when I reached 42km.

I mean, I knew the distance was 42.195km but to know what you’re going to see towards the end helps you to achieve that sprinting finish, because by then, it really is true that you are so nearly there.   My last supper was a pulled-chicken sandwich at Bear Claw. A good combo of carbs and protein. More importantly, it was delicious; a whopping size of pulled chicken and ‘slaw. The menu is in English (which seemed to be the hip thing in Hamburg restaurants…). A messy eat, but a damn good eat. If you’re a Hamburger, or planning a Hamburg holiday, definitely visit Bear Claw. It’s pulled meat heaven.

I started the day as I meant to. A sliced banana on peanut butter slathered on two pieces of toast and several glasses of water. I had packed these all with me (except the water), because I wanted to make sure I ate nothing new on the day. The hotel guests gave me plenty of strange looks as I carefully placed the banana slices on the toast – plus probably the fact I had brought my own food that day!

I hopped onto the U-bahn and then walked to the Athletes’ Area to drop off my race bag. Excitement reached me when I walked past some of the elite men runners. My claim to fame. It was quite a cold that day and I had dressed in my shorts and t-shirt. I had packed some warmer alternatives in my race bag, in case I couldn’t handle the weather. Thank god I know myself well! In the Athletes’ Area, I realised there was no way I would have been able to run comfortably in the cold weather, so I changed into my 3/4 tights and long-sleeved top. I felt a lot better and felt good during the run.    Forward onto the warming up and slow jogging I did, let’s move onto the race.

I had a bottle of water, with a Nuun tab, that I drunk throughout the first half of the race. There were blue skies, it was a bright and sunny day, though cold. The atmosphere was incredible and nothing that I had experienced before. The crowds were lining up the streets of Hamburg and you could sense the excitement among everyone (the video is at the start).

The first 5 km were very slow and when I gazed down at my Garmin, I was a little disappointed. If I wanted to reach my target goal, it shouldn’t have been this slow. I’m partly putting this down to nerves and also spending that time to settle down.

Eventually, I sped up, but not too fast. I kept telling myself not to run too fast. I didn’t want to run out of energy at the end. My pace was comfortable. I didn’t feel like I was going too fast or too slow.    I then looked at my Garmin at the 10km. I was on track. I didn’t look down at the watch from then on until 19km because from experience, I have often struggled at the 16km at half marathons. Luck was on my side. Between that distance, I was feeling good. I was running either in front of, or alongside one of the 4 hour pacers. I was using the route as an opportunity to really experience and see Hamburg. The crowds were cheering us on at every stage, in a rather British manner, drinking cups of tea(?). It made me forget how far I had to run.

My fuel strategy was working and I felt great. All was well until somewhere between 37 and 38 km (23-24 miles). Up until that point I had felt so good. At one point I had even overtaken the 4 hour pacer and was way ahead of her . I never felt like I was running too fast. I’m really happy that I spent over 3/4 of the race, running near the 4 hour pacer. Again, it was comfortable. But then, suddenly between 37 and 38 km, I started to get a nagging pain in my thighs, there were points on my calves that felt sore and my shoulders felt like something heavy was on them. I tried to ignore the pain, and told myself there wasn’t far to go.   Yet despite that, and slowing down, the pain increased. Suddenly, it felt excruciating. My thighs were burning. It was a heavy pain. I was being dragged. The pacer was zooming ahead of me. Suddenly she was was out of my sight.

My pace was dropping and that was putting a damper on my mood. Then, my pace was dropping too much, and before we reached a water station, I felt the only thing I had to do was walk. I don’t know how far I walked. It felt like a 1/2 km, but it might have been a lot, lot less than that. Time felt like it was dragging on.

I picked up my pace again but found the pain was too much, so started to walk again. Then, something kicked in me. The pain wasn’t so bad. I knew I could do this. I was here to run the blue line, and I was going to run the last few kms. As I edged closer and closer to the last kms, I felt so much better and ran like Channing Tatum was at the end of the finishing line. The relief, happiness and joy I felt can all be seen in my finisher’s photo!

I can say that the training and marathon were together a self-developing and confidence-building experience.   When I crossed the finishing line, a medal was placed over my head. In a zombie mode, not registering what I had achieved or the time I had achieved it in, I walked towards the Athletes’ Area. Cups of water were handed out to us, which I am so thankful for. I felt so thirsty. Fuelling stations had been set up in the area and I formed part of another queue to pick up a few snacks. Watermelon slices, yoghurt-coated biscuits and chocolate pastries were among the snacks on offer. Bananas were on offer too, but I had eaten so many bananas during the race (both from my own baby food running fuel and bananas handed out by the organisers) that I couldn’t face the sight or smell of another.

After the marathon, I changed into my compression tights and slipped into my Converses. I felt so comfortable again, though my legs were hurting a lot. I hunted hobbled towards a coffee shop, but I couldn’t find the one I wanted to visit (Milch) and decided to wonder around other parts of the city as a way of keeping moving.

There was a burger place that I had really wanted to visit, and when I found Most Wanted Burger, I felt like I deserved every inch of the food there. Sweet potato fries, apple juice and a four-cheese beef burger. Pure food filth. Pure, utter burger heaven. Hungry Mara was here.

I crawled into bed later in the evening.  I woke up several times throughout the night, feeling very hungry. This happened to me throughout the next few days and nights as well. Constant hunger. The only explanation I can think of is that my glycogen levels were seriously depleted. Yet, I had done it.  Yes, you’ve got that right. I walked to the marathon start, and crawled out at the finish, with the marathon bug. Mara at the start line is a very different person to Mara at the finish line.

Pain is temporary. Glory is forever.

Which Marathon do you want to see me running next?