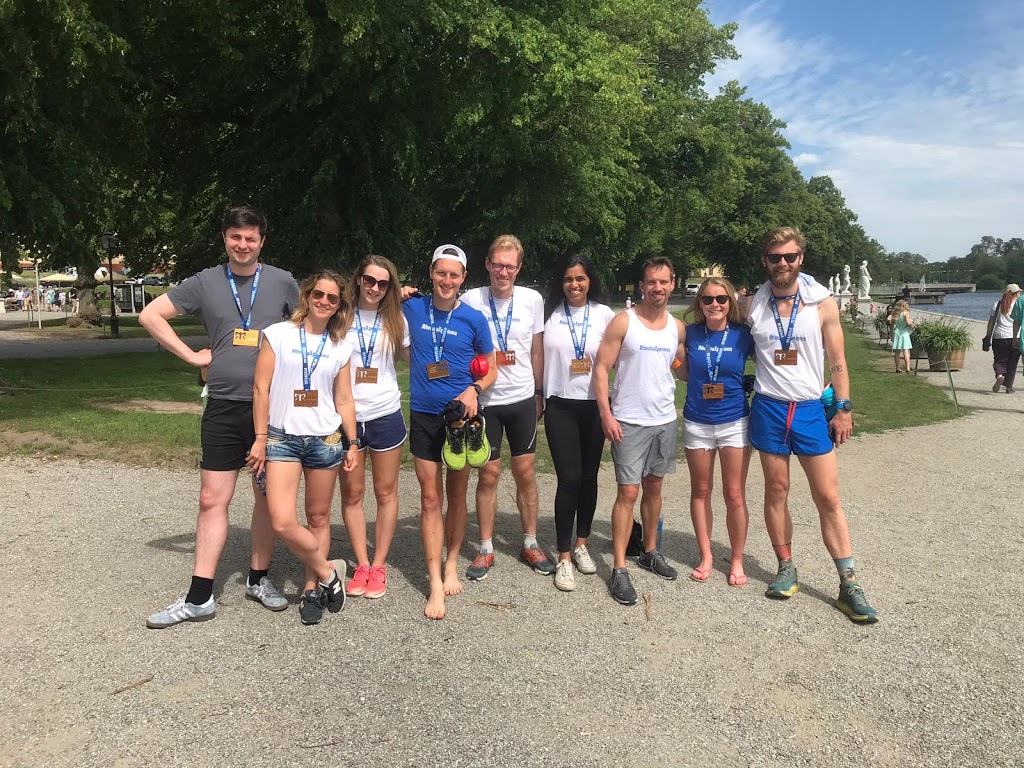 You’re in Sweden for 48 hours. What do you do? Run 250km around a lake of course. Want to know more? Intrigued about running in a relay? In this post, I’ll tell you all about my experience taking part in the team relay race that is the Reebok Ragnar Relay Malaren. Was there anything I found disappointing? How did I find running at 3am? What was lack of sleep like? Did I even sleep? And, what did we even eat?

Ragnar Relay is a series of team relay races held across the world. They’re quite popular in the US but over the past few years are slowly catching on in UK and Europe. I’m not sure if Reebok own or sponsor the series, but with the links to Reebok, these events are also popular among crossfitters. Anyone who does crossfit, or knows anyone who does crossfit, can attest to how much many (but not all) dislike running! At my box, any mention of running in a workout is met with a huge groan. I think I’m digressing a bit, but my point is, there’s something about these events that even get those who don’t like running, taking part.

Ragnar Relay has two different distances. You can either take part in the 250km relay in a team of 10 people  or go even further and attempt a relay of 500km in a team of 5 people. I took part in the 250km relay with the boys from Ultra X and others. Ultra X is the company behind the Wadi Rum ultra I did last year. After taking part in The Speed Project in April (yes, yes, blog post to come), I thought another relay may be fun. Plus, Sweden has always been on my hit list of countries to visit.

Bring pens to graffiti your cars

When you rent a car, get two cars as you’ll split the team into two. When you choose a car, if I were to do this again, I would opt for a larger car. We had two smallish cars (they weren’t Ford fiestas, but think along those lines). Compared to the other teams, these were tiny. IT also meant we were a bit cosy and cramped. I was used to the luxury of motorhomes when I did The Speed Project, ha! But a small  van would be good.

The portaloos were actually surprisingly clean. No, really, they were. They didn’t have flushes but someone mentioned the loos had some chemical which disintegrated everything. Anyway, regardless, those were the cleanest portaloos I’d ever seen and used at a race. What I didn’t like was the lack of bins for sanitary products. Being on my period that weekend couldn’t have come timely enough and finding bins for my used sanitary products frustratingly not easy. This is something they should look into.

Which brings me onto the next point. The Swedish people are so clean. Seriously. Nowhere along the race course did I see empty gel tubes or water bottles lying on the ground.  You wouldn’t have guessed a 250km relay race was taking part. There was a general respect for the environment. I really liked that.

Be comfortable in not showering for a long time

You will sweat. You will get smelly. From what I learnt during The Speed Project and Wadi Rum Ultra (in both, I only had ‘wet wipe showers’). All your team members will. In June, when the Lake Malaren Reebok Ragnar Relay takes place, it was fairly warm. You get used to it. Bring biodegradable wet wipes to wipe down.

It was warm and as I said you will sweat. Salt tablets and/or electrolytes will replace the necessary minerals, like sodium, magnesium, potassium, calcium. Drinking electrolytes have a range of benefits including preventing muscle cramp. For further information on the benefits of electrolytes, check out Precision Hydration’s blog. The brand also provide an online easy-to-use test to determine what your sweat level is and match these results to suitable strength electrolyte they stock. They also do a face-to-face sweat test.*

Unlike The Speed Project, where there were very few places we drove through that had food stopovers (we were running mostly through Death Valley after all), there were several places to stock up on food and eat throughout the relay. I would recommend bringing food with you in advance. But also think about the space you have based on your cars’ sizes. A mixture of sweet and savoury food is a good idea – oranges, bananas, a mixture of nuts and raisins, Maurten drinks (if you struggle to stomach food at certain points) and energy bars are some examples of what you could pack.

If you do buy anything from shops, many of the shops weren’t accepting cash payments, but rather card payments only. So make sure you’ve got a debit/ credit card that you can use abroad (like Monzo or Revolut).

Buy as many bottles of water you can in advance and pack them in the boot of your car. Again, this is where a larger car is really useful. If you run out of water during the event, as I said above with food, there’s lots of places to buy water.

We also noticed that some of the Swedish participants didn’t use bottles, but brought large tubs to fill up with water.

Boxes with ice were a popular choice with many of the Swedish participants as well. It’s something our team didn’t think of and we also wouldn’t have been able to fit in the cars.

Night running and lack of sleep

Running through the night was something I was excited about. In Sweden, when night falls, it doesn’t get dark as it might do in mainland Europe and most places in the world. The darkest it got was like how it is around sunset in UK. For anyone who is scared of running in the dark, it’s not at all frightening in Sweden as it’s still very easy to see. This photo was at 3am!

Sleep-wise, you’ll get limited sleep and equally, depending on how you divide your team and devise your race strategy, one half of the team may find that they do most of the day running and the other half dong most of the night running.  If you’re planning on taking part in a Ragnar Relay event, I would suggest doing some of your runs at night (as late as possible, but obviously where safe). I think most teams slept in their cars. There was one checkpoint that included a dance zone and a sleeping area for sleeping bags, but it wasn’t really the nicest of areas and the field had lots of those insects that bite so we tried to avoid it.

As expected, you’re with a group of people for a long period of time, so knowing when to give each other space is vital to ensuring everyone has a good time.

The Speed Project was an unsanctioned and unofficial ultra relay – our team cars could drive along the runners throughout most parts of our chosen course (unless against the law). However, at Reebok Ragnar Relay, it is an official and sanctioned event where there are rules. Cars are not allowed to drive alongside the runners. But, what you can do, is drive ahead of the runner, meet and check up on them and then drive ahead for final meet up. To be honest, the longest distance most runners do for each leg is around 5-7km – it’s just something you could do for any nervous runners.

I would say the route is well marked. But make sure, before the race begins, that everyone in the team knows what the course route signs look like; our team’s first runner mistook some normal road signs for event course signs resulting in her leg taking her over 30 minutes or so longer than expected. After this saga, everything else was fine – but look, mishaps like that are all part of the fun and adventure!

There are checkpoints – which are clearly marked. For any points where cars are swapping over,  these are the best places to do so. Some of the checkpoints had tanks to refill bottles.

What I would say, is that although the relay race involves running around the Lake Malaren, there are only a handful of points where we actually saw the lake.

In the case of any mishap, make sure all the runners have their phones with them so they can communicate with the rest of the team. For this, I’d recommend a flip belt to store your phone (they do fit an Iphone X) and for music, I’d bring Aftershokz. These are wireless earphones. They are bone-conducting, which means they don’t actually go into your ears, making it safer to use when running on roads as you can hear the cars and general traffic. Many races that ban earphones, will accept these earphones as well.

Power banks to charge your phones is worthwhile.

Ragnar Relay Lake Malaren in Sweden was a really fun experience. Each runner will probably  do a total of 25-30km so while the total distance is 250km, it’s cleverly broken up into legs that are manageable and make the whole event that newbies may find less intimidating.

*Disclosure: I am a brand ambassador for Precision Hydration. Links to the brand’s website are not affiliated.