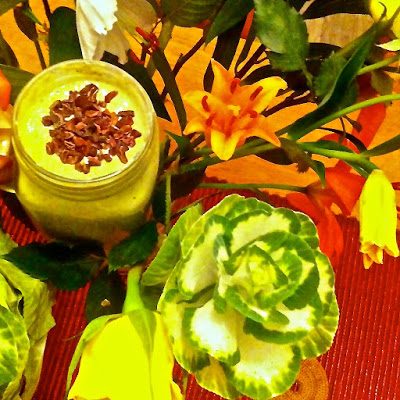 When it comes to sweaty sessions, sometimes there’s nothing better than using food to spur you on.

Those burpees and box jumps can sometimes leave you gasping for breath, as you wonder why on earth you’ve subjected yourself to this workout or class. I’ve found that thinking about food is a way to help me get through a lot of classes and workouts, especially during my long runs for my marathon training. My protein stack sundays are often the result of random food thoughts I’ve had at the gym! And that is how I thought up this protein smoothie.

If I told you my current favourite protein smoothie is a green smoothie, you’d probably roll your eyes. Not another one of those kale-based drinks you’re thinking. I promise that this doesn’t contain any kale. Spinach yes, but just think, Popeye would be proud. Unlike kale, spinach has a very subtle barely-there taste when in smoothies.

Just like most people, I have a healthy appetite for peanut butter (did you see my peanut butter protein stack sunday?). Initially I wanted to use peanut butter in this smoothie, but it turned out I had run out, so I had a look through the kitchen cupboards and realised that it would be quite nice to use tahini. It gives the smoothie that nutty flavour like other nut butters but also adds creaminess to the smoothie. Don’t worry about the bitterness of the tahini coming through because the banana hides this with its sweetness.

The eggs in the smoothie have no taste and are there for protein. Matcha has a lot of benefits, but some of them include enhancing fat burning and giving you energy, which is what you need after a hard workout! Matcha really is a magical superfood. I also love drinking a matcha shot in the morning to get me through the daily grind.

1 banana 1 cup of spinach
1 cup of milk (I used almond milk)
1 teaspoon of tahini
1/2 cup oats (add more if you want to thicken or increase carbs)
1 tablespoon cacao nibs 1 teaspoon chia seeds 1 teaspoon Yumi Matcha 2 eggs   For those in the UK and Europe, you can use Mara10% to get 10% off matcha from Yumi Matcha. UK buyers get free delivery too!

Put all the ingredients in a blender and blend until all is smooth. I personally like the sweetness of this smoothie just like this, but if you have a sweet tooth, you could add a sweetener like stevia, xylitol or honey to taste.
Pour the smoothie into a glass.

Sprinkle some cacao nibs on top for a chocolate crunch (I find that it also tricks my mind into thinking the smoothie is food rather than a drink, which helps  in feeling fuller for longer).

To paraphrase Taylor Swift, it’s time to shake it up with this post-workout matcha smoothie.

Yumi Matcha provided me with their matcha. All opinions are my own.