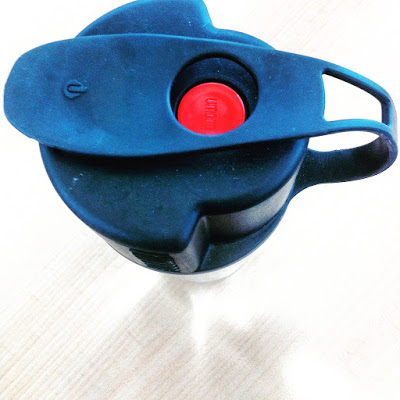 Do not touch the red button.

You’re probably wondering what this is that you’re looking at. No doubt, if you follow me on instagram you’ll have seen my teaser photo last week. Eagle-eyed followers may have already noticed it in a few of my other instagram posts.

The wait is over. It is the Umoro One. The newest addition to my protein shaker collection.

Umoro is a Canadian brand, who started their Kickstarter campaign in 2013 and featured on CBC’s Dragon’s Den, by fitness enthusiasts Joseph Ng and Justin Rosete.

As someone with a full time job in the City, making that transition between work and going to the gym can be a bit of a pain when it comes to keeping hydrated. There are days where I find drinking 3.4 litres difficult, but one thing I have found is the importance of a good bottle. Having a bottle that I can use both at work and at the gym is useful because it means one less bottle in my bag, which means a much lighter bag!

Then there is also the connundrum of protein powder storage. Let’s take the Core150 for example. I love it but it is quite chunky (holding 1 litre) and whilst it does have a storage container that you slot into the bottle, when you want to put 1 litre of water into the bottle, you have to take the protein powder storage container out. Then there’s the Promixxer. Of course, another favourite, but when I want to drink from it, I have to remove the nutripod and switch to another lid.

That’s when Umoro come into play. They have solved the problem. The beauty with Umoro One is that there is an inner storage compartment for 1 scoop of protein powder within the black lid. Just pour your liquid of choice into the bottle, put a scoop of powder into the storage compartment, and put the lid on. You can still drink from the bottle throughout the day. Whenever you want to use the powder, just push the red button and the powder is released.

Umoro feels strong when you hold it. It does feel slightly heavier than other protein shakers out there, but that is primarily due to the the lid, which is where the protein powder storage compartment is located.

It holds 600ml, which is a decent size for drinking from throughout the day. Personally for me, I have to drink up to a litre during gym sessions, especially when I do HIIT sessions (I do get pretty thirsty), so 600ml can seem small, but I can forgo that. It just means making another trip to the water fountain during a gym session!

The lid is made of rubber, and as I said before, it is the heaviest part of the bottle. But unlike other protein shakers, the lid is where all the magic happens.

Firstly, being made of rubber means that you can get a very good grip of the lid. So if you’re doing an interval session on the treadmill and on a 20 second rest, you can grab the Umoro One quickly without fear of losing your grip on it!

The rubber material is so tough, you could hang it on a hook if you wanted to…

The stopper on the lid is another plus. It slots in nicely and unless you tug at it, it won’t pull out, so no leaky protein shaker issue; to be fair to other shakers, a lot of them have dealt with this issue in their own products.

In terms of the powder compartment, I did find that you have to really push the storage lid in to ensure that it is properly sealed. You can look at the lid and see if the seals are sat next to each other. If it isn’t sealed together properly, this can lead to the mixer-mechanism randomly coming out whilst you’re drinking from Umoro One, and so releasing the powder just when you don’t want it. There are other things you could store in the compartment, like electrolyte tabs or Berocca tablets. It’s up to you.

The contemporary design of the lid is what makes it stand out. From a bird’s eye view, it’s eye-catching. The tough rubber material equally means that you can hold the bottle from the piece of the stopper that hangs out, without worrying that you’ll pull out the stopper out of the lid. That’s a nice trick.

And the best part of the Umoro One? The red button. This is the eye-catchy part of the bottle, and in my view makes it what it is. The most unique selling point about Umoro. That red button is a tough cookie. You might accidentally touch the button, but nothing will happen. You have to be firm in pushing the button for it work its magic.

….And that magic is releasing your protein powder of choice and a mechanism which also acts as a blender. Then shake the bottle and the powder will blend.

Blending-wise, I think it’s difficult to find a protein shaker that can beat the power of Promixx,  but for a  protein shaker not battery-powered, Umoro One does blend whey protein very well.  BCAAs, not so much (though that might be down to the BCAAs I used?).

The only gripe I have with the design is the signage on the bottle to mark different ml and fluid ounzes. I have had this bottle for a few months now and already the 600ml sign has completely gone. I don’t put in a dishwasher (even though it is dishwasher safe) so this does irritate me slightly. As I’ve mentioned before on the blog, a protein shaker should not look it’s age. This is something Umoro could work on if they do create an Umoro Two.

The overall design of Umoro One means that you can use and take it wherever you are, without feeling too conscious of it. The protein powder storage compartment is nicely hidden away, so it looks like any ordinary bottle. I quite like that. It nicely fits into the cup holder in cars too.

Umoro One comes in blue, pink, grey and black and comes with a one-year warranty. Americans and Canadians, they do provide free shipping. I would recommend buying from Umoro’s own website or from Bloomingdale’s. Thankfully Umoro ship internationally to Europe, UK, Japan and Australia, so fear not, we are covered!

I’ll leave you now to watch Umoro’s advert for Umoro One. I love how film-like the advert is. Is that what American adverts are like in general? If I haven’t persuaded you to buy Umoro One, just watch this advert!

Disclaimer: Umoro provided me with Umoro One, however all opinions are my honest and my own.